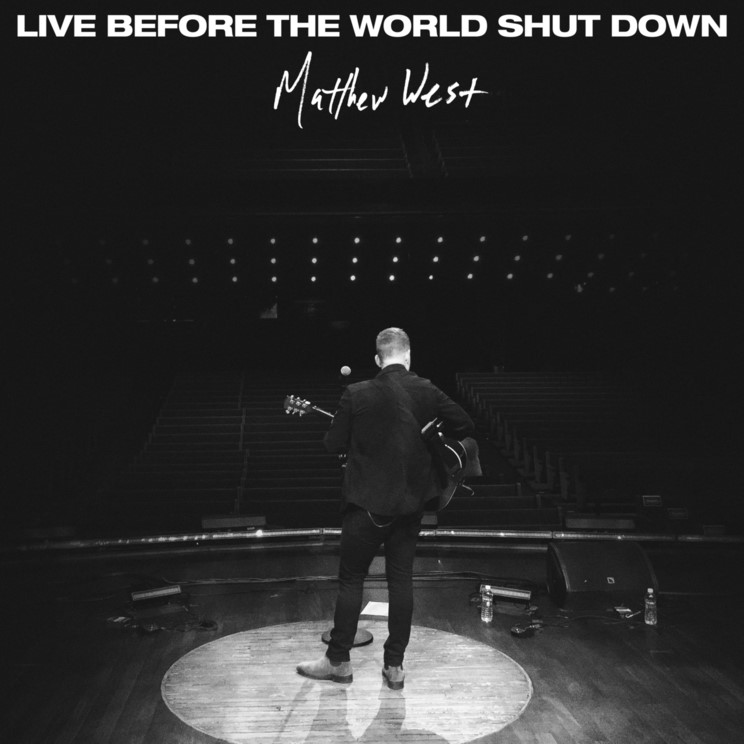 NASHVILLE, TENN. (OCTOBER 02, 2020) – Five-time GRAMMY® nominated artist Matthew West announces a live EP, Live Before The World Shut Down, releasing on October 30th with the pre-order available today. The first single available now is the No. 1 radio single, “The God Who Stays.” The six-song EP features songs recorded earlier this year before the global pandemic closed the live entertainment industry, including the additional No. 1. radio single, “Nobody,” from Casting Crowns that West co-wrote.

“Among the many things that have been taken away from us in 2020, live music has been pretty much shut down,” shares Matthew West. “Our tour buses have been parked, our production placed in storage, and the bands and crews have all been sent home for the most part. It’s made me pretty sentimental lately, missing the beautiful moments that have taken place over the years on stage with audiences across this great country. So, I had this idea to gather some recordings from some of our most recent performances and put out a little live EP called, Live Before The World Shut Down. Just listening to these recordings gets me excited to once again be able to gather together. And when we do, I have a feeling we will all be singing louder than ever before giving thanks to the God who stays faithful and brings us through! In the meantime, maybe this little live EP can hold you over until we meet again on the road.”

Although this year has not included as many live shows as would be typical for West, he has continued to share music and encouragement with his fans throughout the quarantine time and beyond. In lieu of in-person live events, West has hosted his own live streaming events and has recently announced his second special event, “West Fall Fest,” live on October 16th at 7 pm Central. Click here to learn more information.

Earlier this year, he released his new studio album, Brand New, which produced the multiple-week No. 1 single, “The God Who Stays.” During the COVID-19 pandemic, West hosts his weekly “Quarantine Quiet Time” from his home studio with his family and released two new songs that went viral: “Quarantine Life” and “Take Heart.” In August, he launched his weekly podcast, “The Matthew West Podcast,” which debuted at No. 1 on the Apple Religion & Spirituality chart. He was also nominated for a GRAMMY award, for four GMA Dove Awards (which will air on October 30th) and most recently a Billboard Music Award.

ABOUT MATTHEW WEST: Matthew West is a five-time GRAMMY® nominee, a multiple ASCAP Christian Music Songwriter/Artist of the Year winner and a 2018 Dove Award Songwriter of the Year (Artist) recipient and has RIAA Gold certified and RIAA Platinum certified singles. He has received an American Music Award, a Billboard Music Award, a K-LOVE Fan Award and named Billboard’s Hot Christian Songwriter of the Year. West also received a Primetime Emmy® Award nomination for Original Music & Lyrics for the title track for the feature film “The Heart of Christmas.” In addition to his own recording career, he has more than 130 songwriting credits to his name, including cuts by Rascal Flatts, Scotty McCreery, Michael W. Smith, Amy Grant, Mandisa, Danny Gokey and others, along with back-to-back No. 1 songs by Casting Crowns including their single, “Nobody,” which features West. He was also nominated for a GRAMMY Award in 2019 for Casting Crowns’ song, “Only Jesus,” as a songwriter. West also co-wrote Jeremy Camp’s multi-week No. 1 song, “Keep Me In The Moment.” Earlier this year, he released his new studio album, Brand New, which already produced the multiple-week No. 1 single, “The God Who Stays.” In August 2020, he launched his official podcast, “The Matthew West Podcast.”