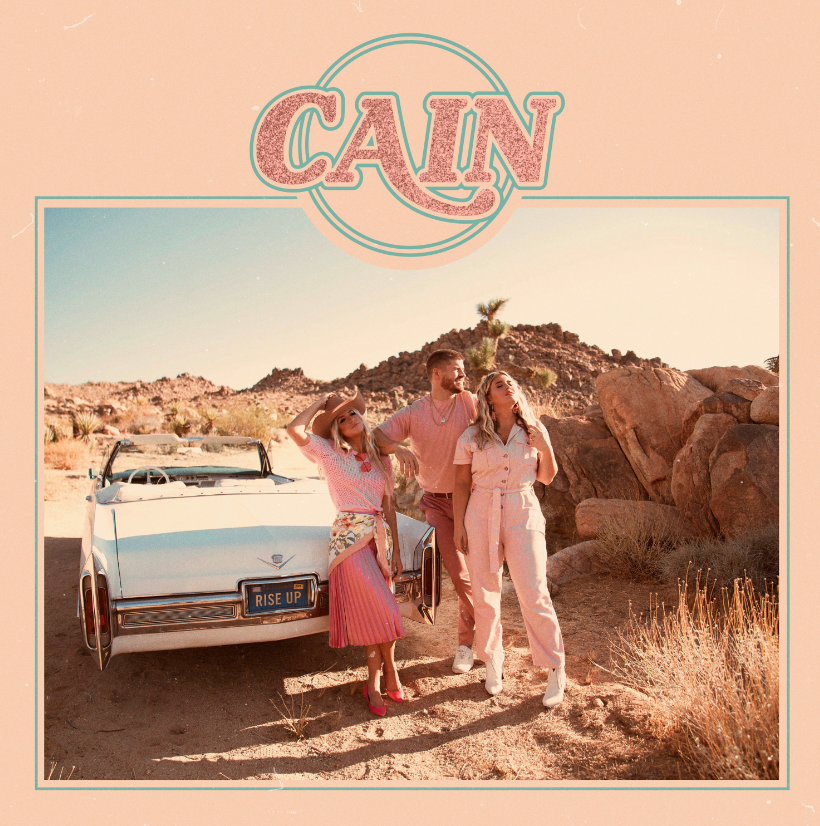 THE DEBUT ALBUM FROM CAIN, RISE UP, IS OUT NOW! Current Single “Yes He Can” Continues To Jump Up The Charts; Performing On K-LOVE On Demand’s Mainstage, Live At The Ryman, May 14; CAIN Included In FENDER NEXT 2021 Class

7 May 2021 – Franklin, Tenn – CAIN, the sibling trio behind the multi-week No. 1 single “Rise Up (Lazarus)”  officially release their first full-length album today, Rise Up (Provident Label Group/Sony Music). Their current single, “Yes He Can,” is already No. 15 on the Billboard Audience Chart, jumping quickly after hitting radio just two weeks ago. The ten-song project is the follow-up to their 2020 self-titled EP.

To celebrate the release of Rise Up, CAIN – which is comprised of Madison Cain Johnson, Taylor Cain Matz, and Logan Cain – will appear Friday, May 14 on Mainstage: K-LOVE Presents CAIN Live at The Ryman. Exclusively viewed on K-LOVE On-Demand, the show begins at 7pm CT. They will share songs from the new album, including the aforementioned “Rise Up (Lazarus),” “Yes He Can,” and many more. Click here for more details on this not-to-be-missed concert event!

Additionally, the group was recognized by Fender Guitars by being included in the FENDER NEXT 2021 Class. FENDER NEXT is Fender’s artist development program, designed to support emerging artists that are moving guitar forward in music and culture. 25 artists, all from diverse genres, were chosen for the program from a pool of thousands of submissions. Over the course of the year, Fender provides CAIN and the other artists with gear and support to showcase their work, amplify their voice and introduce their music to new fans. Find out more here.

CAIN continues to share their songs live on the road this spring with Zach Williams’  Drive-In Theater Tour. Hitting 50 cities around the U.S., along with additional summer shows, the trio will again join Williams’ rescheduled Rescue Story Tour this fall. Be sure to keep up to date with their touring schedule.

ABOUT CAIN: The music of CAIN quickly became a mainstay at radio since their debut single “Rise Up (Lazarus)” released in early 2020. They’ve also released additional versions of the song: a duet with labelmate Zach Williams, a version with Will Franklin of Colony House, as well as an acoustic version recorded with Essential Worship for its Song Session Series. They also dropped an acoustic cover of “Egypt,” which was originally released by Bethel Music and Cory Asbury. CAIN has also covered several other worship songs with Essential Worship, along with a stunning rendition of Williams’ and Dolly Parton’s duet “There Was Jesus.” Additionally, last Christmas they released the top 10 hit “Celebrate Me Home,” which became one of the highest-charting radio singles during the 2020 holiday season.

Raised in Hartselle, Alabama as pastor’s kids and now residing in Nashville, TN, CAIN got their first break opening for Dave Barnes and Andrew Ripp at a show in 2012. A decade later they are hitting No. 1 at radio and releasing their first full-length album.

It has been said that you spend five minutes with the members of CAIN and you’ll feel like you’ve spent the afternoon in the sunshine. Their joy spills over onto each person they meet, their bright smiles as contagious as their stunning harmonies. Pouring their joy into their debut album Rise Up, CAIN has discovered what it’s like to live their calling while doing their favorite thing – singing about Jesus.

Find out more by checking out their bio below and by visiting CainTheBand.com