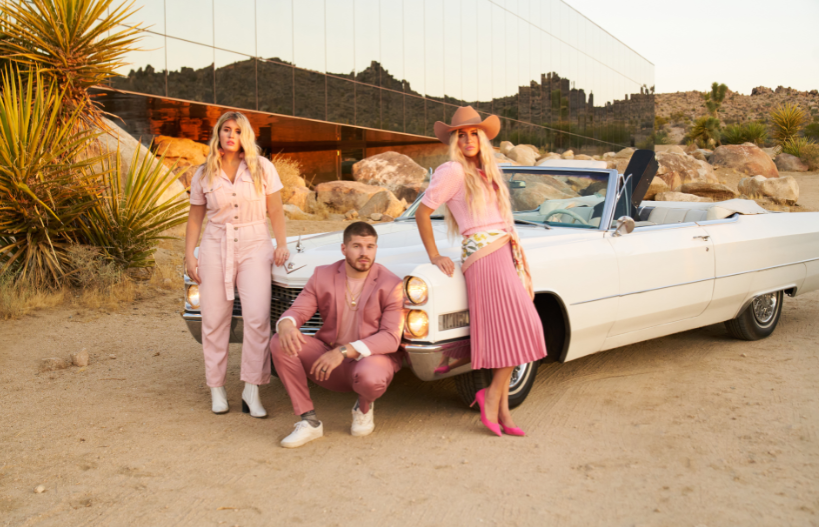 AWARD-WINNING SIBLING TRIO CAIN ACHIEVES BACK-TO-BACK NO. 1 RADIO SINGLES; “Yes He Can” Hits The Top This Week At Radio Following Their Debut Chart-Topper “Rise Up (Lazarus)”

28 July 2021 – Franklin, Tenn – On the heels of winning the K-LOVE Fan Award for their debut No. 1 “Rise Up (Lazarus)” (Top Breakout Single), sibling trio CAIN has achieved their second career No. 1 with “Yes He Can.” The back-to-back top singles are included on CAIN’s first full-length album, Rise Up (Provident Label Group/Sony Music), which just released this past spring.

Astounded at hitting the top spot for the second time, the band collectively shares, “Wow! We’re truly at a loss for words. How could we ever be grateful enough? A young woman shared how this song was her anthem as she prayed for her dad in the hospital. We’ve gotten to see videos of congregations in Hong Kong and Kenya singing it and praising God. Moms have sent us videos of their kids singing it in the car. What a privilege. THANK YOU GOD for letting us be part of that!”

“Yes He Can,” “Rise Up (Lazarus),” and many more of their songs can be heard live as CAIN – comprised of Logan Cain, Madison Cain Johnson, and Taylor Cain Matz – tours around the U.S. this summer at numerous festivals and special events, including next week’s tour stop at Red Rocks Amphitheater in Denver, CO. The trio will then embark on the road this fall with labelmate Zach Williams on his Rescue Story Tour, followed by the K-LOVE Christmas tour, headlined by Casting Crowns, throughout December. For all of the latest tour dates, be sure to visit their tour page here.

Also, don’t miss CAIN’s fun music video for “Yes He Can” below, which shares many touching stories, all of which show support from Logan, Madison, and Taylor and are backed by a decked-out choir. From learning how to shoot a basket to being on a first date, the group even included their dad in one of the video’s stories to share his experience recovering from knee surgery.

“What we wanted to show in the video is how God uses the people around you to help make those miracles come to pass,” says Taylor. Madison adds, “We hope that when the listener hears the song, they hear us cheering them on and that we’re with them!”

ABOUT CAIN: The music of CAIN quickly became a mainstay at radio since their debut single “Rise Up (Lazarus)” was released in early 2020. Raised in Hartselle, Alabama as pastor’s kids and now residing in Nashville, CAIN – Madison Cain Johnson, Taylor Cain Matz, and Logan Cain – got their first break opening for Dave Barnes and Andrew Ripp at a show in 2012. A decade later they’ve hit No. 1 back-to-back at radio with their first two singles, released their first full-length album, and won a K-LOVE Fan Award for Top Breakout Single (“Rise Up (Lazarus).”

It has been said that you spend five minutes with the members of CAIN and you’ll feel like you’ve spent the afternoon in the sunshine. Their joy spills over onto each person they meet, their bright smiles as contagious as their stunning harmonies. Pouring their joy into their debut album Rise Up, CAIN has discovered what it’s like to live their calling while doing their favorite thing – singing about Jesus.

Be sure to visit CAINTheBand.com.